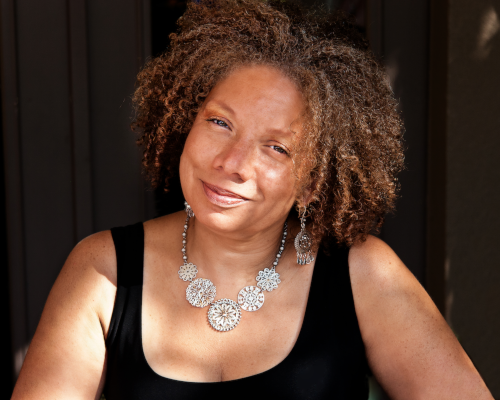 Marketing and nonprofit executive Yvette Moyo was born in Chicago, Illinois, and attended South Shore High School. She graduated from Eastern Illinois University with her B.A. degree in Afro-American Studies.

Upon graduation, Moyo was hired at the National Publication Sales Agency to work with the original Blackbook as a door-to-door saleswoman. She was promoted to account executive with the Blackbook and Dollars & Sense magazine, and eventually to the position of senior vice president of sales and marketing. Moyo remained at Dollars & Sense magazine handling branding, national events, and advertising until 1988 when she married Karega Kofi Moyo.

Yvette and Kofi co-founded the marketing firm, Resource Associates International, Ltd. (RAI) and launched Real Men Cook for Charity, an annual Father’s Day celebration in 1990. Their Father’s Day events were held in thirteen cities and featured on network TV and in major national publications. These events generated over $1 million for various nonprofits. Co-founder of the nonprofit organization Real Men Charities, Inc. in 2003, Moyo served as Executive Director until 2013, and today serves as Chairman and CEO. RMC’s mission is to build healthy families and communities. It has a demonstrated track record of accomplishments, outreach, partnerships, and campaigns to promote male involvement in families and communities, health, and food stability. Born out of a demand for the Real Men Cook spirit of mentoring and service to be provided year-round, the organization partners with organizations and stakeholders, public and private.

In 1992, Moyo launched the Marketing Opportunities in Business & Entertainment (MOBE) Advanced Marketing Symposium series to deliver business building, education, and mentoring resources to African-American marketing, technology, sports & entertainment professionals with growing businesses. MOBE was created to engage, empower and bring together talented innovators and influencers across all industries and stages of their careers with the common goal to align, advance, accelerate success and create new opportunities. The organization facilitated deals and generated over $200 million in business to African-American companies in the first dozen years. In November of 2001, MOBE co-hosted a White House briefing on African American Business and Technology.

Moyo is the co-creator of two books: Real Men Cook: More Than 100 Easy Recipes Celebrating Tradition and Family, published by Kofi Moyo in 2005; and Real Women Cook: Building Healthy Communities with Recipes that Stir the Soul, co-authored with Sharon Morgan in 2012. Even the White House celebrated Father's Day with men serving dishes and promoting responsible fatherhood. In 2001 before becoming U.S. President, Barack Obama donned a Real Men Cook bandana and served at the event. He mentioned Yvette in the foreword he wrote in the Simon & Schuster published book, “Real Men Cook: 100 Recipes for Family Celebration” in 2004 for the hardcover and in the 2005 softcover edition.

Moyo created and marketed a special Limited Edition Real Men Cook Hot Sauce, coffee line, and the gourmet Real Men Cook Sweet Potato Pound Cake Mix®, which was available at nearly 200 Jewel-Osco Food Stores for over a decade and promotionally to as many as 3000 retail establishments throughout the country. Recognized as an “expert that has enhanced the food scene in Chicago,” she is the recipient of the Chicago Tribune’s coveted Good Eating Award.

Real Men Charities has presented the Urban Green Pavilion at the African Festival of the Arts, hosting workshops to introduce Chicago’s urban community to urban agriculture and food justice. She is the founding member of Good Greens, presenting the Good Greens Festival in 2008, which became GoodGreens.org managed by the USDA. That same year, Real Men Cook was honored and showcased on the show “Emeril Live!”

Moyo served on the University of Chicago Medicine Urban Health Advisory for three years and lead Real Men Charities programming including Real Men, Building Healthy Families and Communities, partly funded by Blue Cross and Blue Shield of Illinois and implemented in ten Englewood elementary schools, as an extension of the Real Men Cook with Kids program, featured on the Al Roker show in a segment called Do Good Food in 2004. Several of the organization’s health programs have been funded by the Illinois Department of Public Health, including prostate cancer and HIV AIDS awareness and screenings and as well as obesity education and prevention.

Moyo led the Eat to Live Englewood Urban Garden and Farm Development collaborative between Real Men Charities, Inc., and Angelic Organics Learning and is a former Board member of the Deeply Rooted Dance Theater, was active in the “Let’s Move” healthy initiatives, and was part of the team that advised the White House fatherhood website, www.fatherhood.gov.

Moyo was honored in 1988 as one of the “100 Women to Watch” in Today’s Chicago Woman. She has also been the recipient of multiple awards, including the Public Relations Advertising and Marketing Excellence Award, the Woman in Entertainment Pioneer Award, the 50 Women of Excellence Award, Trailblazer/Women in the Fatherhood Movement Award presented by Congressman Danny Davis, YMCA’s Black Achievers Award, and the Black Women's Hall of Fame Kizzy Award. In 2015 she was honored at the Allstate Tom Joyner Family Reunion as a Champion for Change, credited with changing the way Father’s Day is celebrated in multiple U.S. cities. The November 2017 Crain’s Chicago Business and AARP named her one of 50 over 50 in Illinois in the Community Building category.

Moyo launched The South Shore Current Magazine in 2014 and the West of the Ryan Magazine in 2016 to highlight the people, the arts, and programs in the neighborhood where she grew up and now lives. The expanded circulation publication is today the South Side Drive Magazine: Guide to the Good Life Chicago. In 2018, she galvanized a group of business executives to purchase The Quarry and turn it into an entertainment and events center. It has provided jobs and training for community residents and currently houses offices for small businesses, mental health programming, and provides healthy food and jazz entertainment for the constituents.

Yvette Moyo was inducted into The HistoryMaker’s archives in 2013 and is delighted that First Lady Michelle Obama included the University of Chicago’s involvement in Real Men Cook’s preventative health initiatives for men in her Professional Accomplishments Bio before becoming First Lady.